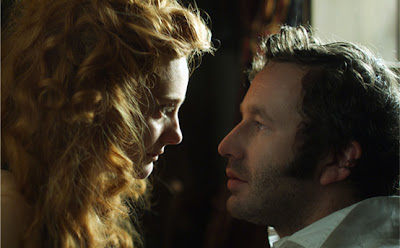 With his wife, Agnes (Hale, outstanding), near enough bedridden through mental illness, William Rackham (O'Dowd, excellent), heir to a soap manufacturing business and possessor of unrealistic literary ambitions, seeks comfort in the arms of a well recommended young prostitute, Sugar (Garai, typically accomplished), a 19-year-old six-year veteran of her profession with a great deal more writing talent than he himself possesses, in this engrossing, decidedly well crafted, and generally thoroughly entertaining four-part adaptation of Michel Faber’s 1870s-set novel. Their relationship quickly develops from brothel exclusivity rights through swanky shag-pad to live-in lover, when he appoints her as his eight-year-old daughter Sophie’s new governess. Along the way, genuine feelings develop between the pair, as business gives way to love – or some sort of approximation of it. However, Agnes’s continually deteriorating health problems and William’s own proneness to wildly erratic mood swings soon have Sugar worrying for the future state of her own continued happiness, a worry complicated further by the intense mutual bond that she has formed with the child, leading her to contemplate some decidedly difficult and perhaps dangerous decisions about all of their futures.
-- Iain Stott