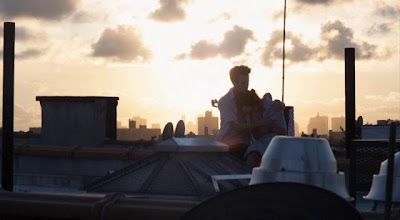 Gray’s exquisite little character study often feels like a cross between an Aaron Katz film and a Sofia Coppola picture – a comparison likely to put the fear of God into a fair number of filmgoers. And if I were to qualify that statement by saying that The Exploding Girl proves to be much closer to Katz than Coppola, I’d likely scare off a good few more. However, for that small band of us for whom such an appraisal is a decidedly mouth-watering one, the discovery of this little-seen gem will almost certainly prove to be a very welcome one. Eschewing the usual handheld camerawork associated with this sort of verité, DP Lin’s arresting, painterly photography beautifully depicts the everyday life of the film’s protagonist in a series of telephotographed long shots, which strikingly capture the bustling street life of New York as it goes on obliviously around the main action. Said protagonist, Ivy, played wonderfully by the outstanding, perennially underused Kazan, is a young epilepsy-suffering college student, home for the summer, who slowly comes to realise that the feelings that she has for her childhood friend Al (Rendall), who has been staying with her and her mother (Urbano) for a week or two, have developed into something more, whilst her relationship with her college boyfriend Greg (Pipp) has slowly and painfully died. And though the plot may sound familiar (and vaguely hackneyed) in outline, the skill and poetry with which it has been translated to the screen makes it feel as fresh and intoxicating as such a romantic coming-of-age tale ever has. Bewitchingly beautiful.
-- Iain Stott