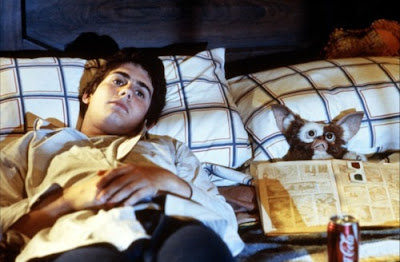 In Dante’s stylish, inventive, and oft hilarious perennial Christmas favourite, a small town finds itself overrun with murderous green sprites. The catalyst for the mayhem being a decidedly rubbish inventor’s ill-advised purchasing of an exotic new pet for his somewhat dopey son, Billy (Galligan), in a back-street Chinatown bric-a-brac shop. Sold to him by the proprietor’s grandson without the old man’s consent, the mogwai – a cute little bear-like creature – was handed over with strict instructions for its safe upkeep: firstly, it must be kept out of bright light, especially sunlight, which can kill it; secondly, it must be kept away from water; and thirdly, it must not, under any circumstances, be fed after midnight. Predictably, Billy, bright spark that he is, soon manages to break all of the rules, with his getting it wet leading to it multiplying, and his feeding of the resulting offspring after midnight resulting in their transformation from cuddly creatures to cannibalistic critters. Never the less, as implausible as it would seem, Billy, aided by potential girlfriend Kate (Cates), proves himself the most likely resident to come to the town’s rescue... God help them! Good, unwholesome fun.
-- Iain Stott