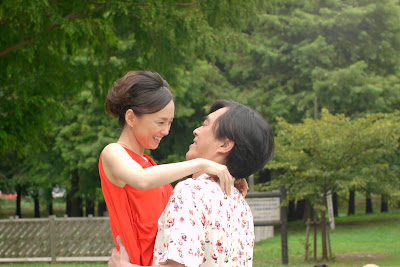 For most of the running time of Ogata’s feature debut, we are treated to a gently paced and gorgeously scored little comedy, filled with endearing performances and delightfully deadpan (if, at times, somewhat low-brow) humour. Unfortunately, the final act sees everything wrapped up just that little bit too easily, tidily, and unconvincingly, with its happy ending not feeling particularly well-earned. Still, the film’s strengths just about outweigh its weaknesses, with the performances of Masuoka and Nagasaku being particularly noteworthy. Masuoka plays Hiroshi, a talented but undervalued character actor, forever destined to play supporting parts, who lives in the oppressive shadow of his renowned playwright father (Tsugawa). He also regularly finds himself in trouble with the police, with his good nature and unfortunate tendency to be mistaken for others often landing him in gaol. One such incident, though not seeing him incarcerated, does result in his losing out on the opportunity of landing his first leading role, when an act of human decency becomes twisted by a tabloid journalist. It’s not all bad, though; another such incident sees his life enriched by his introduction to a feisty, struggling young actress, Aya (Nagasaku), to whom he comes to the rescue when she is erroneously accused of pickpocketry. These two incidents drive the action for the remainder of the running time, with Hiroshi endeavouring to both remedy his casting woes and understand his feelings for Aya. A promising debut, then, but a somewhat imperfect one at that.
-- Iain Stott