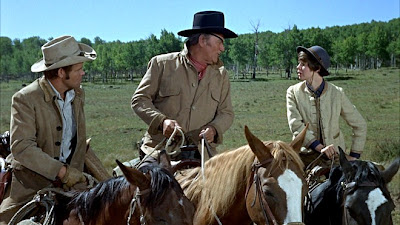 A feisty, single-minded teenaged girl hires a grizzled, drunken, trigger happy U.S. Marshal to track down the cowardly killer of her beloved father, and, with a young Texas Ranger in tow, sets off in his company, much to his chagrin, in this diverting, though strangely light-hearted, adaptation of Portis’s Old West-set novel. The performances are a mixed bunch, with Darby excelling as the young girl, and Duvall doing well in a small role, but Wayne is his usual camp self, and Campbell’s performance is, perhaps, a tad bland. Otherwise, solidly (if not particularly noteworthily) crafted.
-- Iain Stott