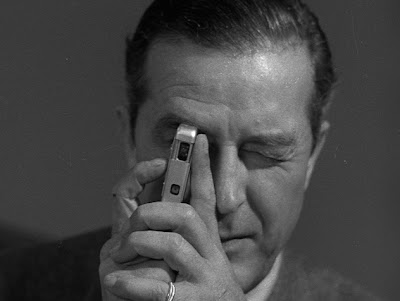 A nuclear physicist with a sideline in spying for, presumably, the USSR finds his already stressful life become ever more so, when a member of his spy ring is knocked down by a car whilst carrying microfilm that could potentially expose him to the authorities, in Rouse’s brave, but vaguely gimmicky, espionage thriller, which tells its story entirely without dialogue. Milland’s performance is excellent and the film-making of Rouse is generally first-rate, but the score is sometimes rather overemphatic and the ending fails to convince.
-- Iain Stott