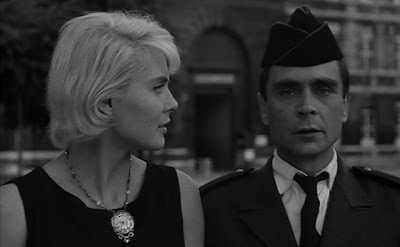 In Varda’s vibrant, meanderingly engrossing real-time character study, a neurotic pop star  (Marchand, excellent) spends a couple of hours killing time whilst awaiting the results of some rather worrying medical tests, which she fears, particularly after an ominous visit to a tarot card reader, will be decidedly grave. She goes shopping with her superstitious maid, entertains a gentlemen caller, meets with her songwriters, and takes in a short silent film with a life model, but is unable to relax until she meets a silver-tongued, Algeria-bound soldier, who agrees to go with her to get the results if she’ll later accompany him to the station and see him off.
-- Iain Stott