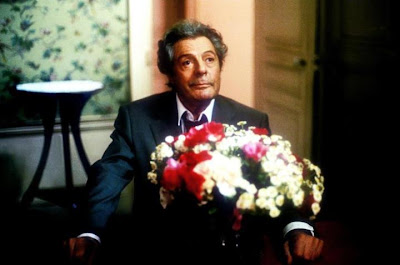 In Ruiz’s crudely but entertainingly allegorical comedy, three tall tales – involving a travelling salesman, who returns to his wife after an absence of twenty years with a fairy story to usurp her new husband; a renowned negative anthropology professor-turned-tramp, who becomes involved with a successful businesswoman-turned-prostitute; and an enigmatic benefactor, who sponsors the sickeningly lovey-dovey lifestyle of a feckless young couple, whilst posing as an unpredictable butler – slowly come together in a fourth tale, which sees the connections between the other three made apparent. Playing four different characters, Marcello Mastroianni proves good value, whilst the rest of the cast also does well, maintaining the piece’s disconcertingly enigmatic tone. The film is also particularly well crafted, with attractive photography and gorgeous production design. However, at times it does all just feel a tad ephemeral.
-- Iain Stott