The Black Sheep of Whitehall 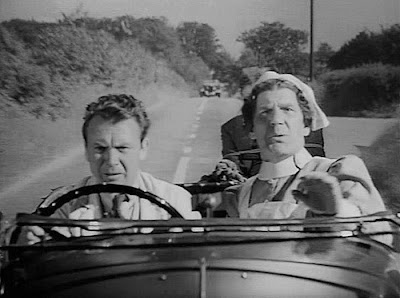 Being without an adequate stooge against whom to play – barring one scene at the beginning of the film with a debuting Thora Hird – Hay is not quite at his best here, in this ridiculously plotted wartime comedy, but still proves good value for money, though the oft great John Mills, given something of a thankless task, never appears in any way comfortable with his role. However, the sharp screenplay’s gag-heavy dialogue is often excellent, with the picture proving generally well-crafted. In it, Hay plays Professor Davis – the vaguely seedy, decidedly incompetent principal of a financially failing correspondence school – who heads to the Ministry of International Commerce, Whitehall, to seek remuneration from his one and only pupil (Mills), a young civil servant who quite rightly gives him short shrift. However, confused by the vague promise of a job offer, the old fraud disastrously comes to be mistaken for the eminent visiting economist Professor Davys, who is due at the ministry to advise on a soon-to-be-signed South American pact. Never the less, his bungling somehow comes to expose a Nazi plot to hijack said treaty, which he and his former pupil unaccountably set about quelling by themselves.
-- Iain Stott