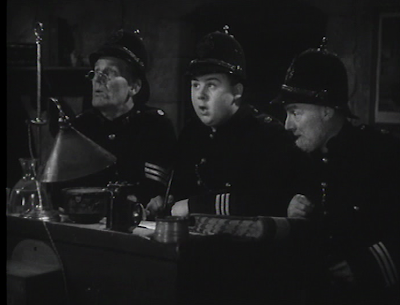 Once again mining Arnold Ridley’s The Ghost Train (1923) for much of its material – with a bit of Russell Thorndike's Dr. Syn thrown in for good measure – Ask a Policeman could easily have been dismissed as merely Oh, Mr. Policeman! by its less generous viewers. However – beautifully crafted and packed with great gags and winning performances – the film proves (standing on its own merits) just about the equal of 1937’s Oh, Mr. Porter! Hay once again plays a seedy incompetent – this time a small coastal village police sergeant who has not made a single arrest in over ten years on the job (mostly because he and his two constables, played by Moore Marriott and Graham Moffat, commit most of the village’s misdemeanours themselves.)

With their station set for closure due to this seeming lack of local crime, the three officers become determined to find some notable wrongdoings to report, even if they have to manufacture them themselves, which they soon set about doing after  an attempt to catch speeding motorists comes to naught. However, their chosen crime – smuggling – just so happens to be one that has been going on around them for some time anyway, and one for which they have been playing an unwitting part, making their apprehension of the smugglers (who have been using a local legend about a headless horseman as cover for their misdeeds) nigh impossible to do without implicating themselves in the process.
-- Iain Stott