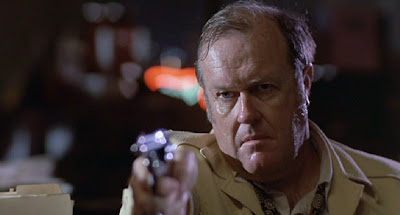 Joel & Ethan Coen | 1984 | ★★★★★
When a private detective (M. Emmet Walsh) catches a bar owner’s wife (Frances McDormand) in flagrante delicto with one of his barmen (John Getz), the wronged party (Dan Hedaya) hires said dick to kill them both. However, reneging on their deal, the gumshoe fakes their murders and kills him instead. Subsequently, the bartender discovers his boss's body and, assuming his new girlfriend to be responsible, sets about tidying up the mess. The trouble is he’s not quite dead yet. And this is only the start of their problems, in the Coens’ masterful, dangerously atmospheric debut. Beautifully unhurried pacing, majestically neon-lit photography, and a handful of outstanding performances combine to quite magnificent effect.
-- Iain Stott