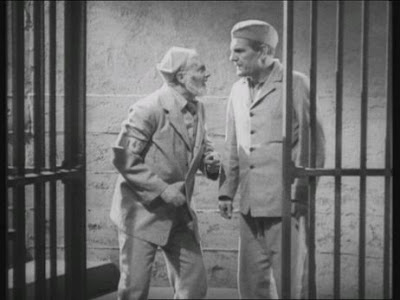 Recently relieved of his position as headmaster of St. Michael’s School, Will Hay’s Dr. Benjamin Twist, an incompetent old duffer, is coerced in to attending an interview for a low-paid position at a school for backwards boys. However, through a case of mistaken identity, he is instead unwittingly given the role of governor of a high security prison – a role for which he is decidedly underqualified. On his arrival at the jail, a second case of mistaken identity sees the blind drunk Twist mistaken for a just-escaped prisoner and confined as convict 99. Eventually, though, restored to his not-so-rightful position, and after three days of hard labour, he takes charge, and quickly implements sweeping changes – changes that see the prisoner-run, stock market-financed institution quickly come to resemble a holiday camp. But of course, it only takes one bad seed… In an uncharacteristically plot-heavy film, Hay is, as always, quite wonderful. Never the less, it is Moore Marriot who steals the show, playing the part of Jerry the Mole, a tunnel-digging convict whose 40 years of hard work comes to naught, when he tunnels into the governor’s office after working from an out-of-date plan. However, Graham Moffat, given less to do than usual, and all too often separated from his fellow stooge Marriot, is somewhat less effective. Cameos from the starry likes of Basil Radford, Googie Withers, and big band leader Teddy Brown, amongst others, also play their part, in this lovingly crafted, consistently hilarious comedy.
-- Iain Stott