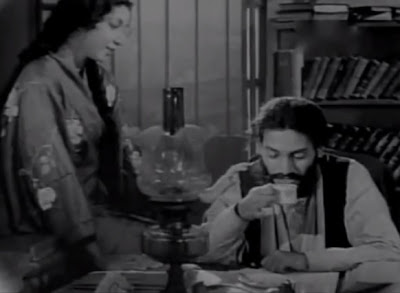 Bose’s well-crafted biopic traces the life of renowned Bengali poet Michael Madhusudan Dutta, from his conversion to Christianity in 1943, at the age of 19, to his death in Calcutta 30 years later. Incident packed, the film tells of his estrangement from his wealthy Hindu family; his acclaimed but commercially unsuccessful spell as an English language poet; the break-up of his first marriage, to the English descended Rebecca Mactavys, with whom he had four children; the loving endurance of his second marriage, to Henrietta Sophia White, also of English descent, with whom he had two further children; his rise to prominence as a ground-breaking Bangla bard; his unhappy spell in London studying to be a barrister (followed by his penurious stay in Paris); and finally, his inglorious return to India and subsequent descent in to alcoholism. Utpal Dutt, in the central role, perfectly captures the arrogance and unrepentant regret of his character, driving the film with a confident display, with fine supporting turns, interesting photography, snowballing melodrama, and solid (occasionally inspired) direction also playing their part.
-- Iain Stott