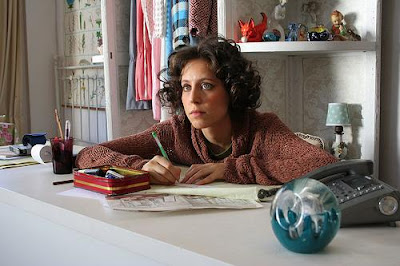 Martín Carranza & Victoria Galardi | 2008 | ★★★
As light and gentle as leading lady Inés Efron’s slight frame, Amorosa Soledad (a play on words – her character’s name is Soledad) at times risks drifting into inconsequentiality – but, with said actress’s enchanting and thoroughly charming central performance, it ultimately proves quite affecting. The film begins with Soledad’s tear-stained face staring dolefully (through us) into a mirror, after having been dumped by her commitment-phobic boyfriend Nico (Nicolás Pauls), and ends, an hour and a bit later, with her again staring straight at us, this time with a huge smile on her face, after having taken up with a new man, coincidentally called Nico (Fabián Vena).

In between, she attempts to come to terms with who she is. Torn between the desire to have a partner with whom to share life’s ups-and-downs – such as blocked toilets, lost keys, and the like – and having a sense of her own identity, which she fears she loses whenever she is with someone, she finds it hard to commit to either the single life or to the idea of a potential new beau. It doesn’t help, the fact that she’s as neurotic as any Woody Allen leading man. But eventually, with the arrival of Nico No.2, she does seem to find for herself happiness of some sort. Hardly the feminist ideal, then. Still, much like Efron herself, the film proves strangely and gently alluring.
-- Iain Stott