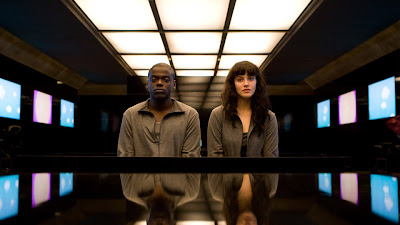 In a not so distant future, where society has been reduced to two main industries – power and entertainment – members of the public spend their days sat on electricity-providing exercise bikes staring at screens filled with cruel, humiliating, and puerile entertainment – entertainment that they nevertheless dream of one day providing themselves. Their evenings, spent alone, are also dominated by screens, which fill the walls of their bare, cell-like rooms. Merits earned cycling, as well as being used for necessities like food and water, can be used to purchase pay-per-view porn, inane apps, and other such distractions, or merely sacrificed in order to skip the ubiquitous advertising with which they find themselves bombarded throughout their waking hours. The only possible escape from the monotony of their lifestyles – though most are too distracted to care – is offered by X-Factor-like talent shows that dominate their screens – auditions for which can be purchased for the eponymous 15 million merits. Against this backdrop, Brooker and Huq have spun a satirical, allegorical tale of love, loss, and impotent rage, railing against a broken system in which little screens (devoid of anything even vaguely resembling art) have become the new opium of the masses. Their impressive screenplay, thoughtfully brought to life by Collins’s convincing production design, under the tutelage of Lyn's skilful direction, aided by Bromley’s quietly effective photography and McKeon's delightfully doleful score, is driven by Kaluuya’s powerfully subtle and subtly powerful central performance and Brown-Findlay’s heart-breaking supporting turn, forcefully yet convincingly getting over its point.
-- Iain Stott