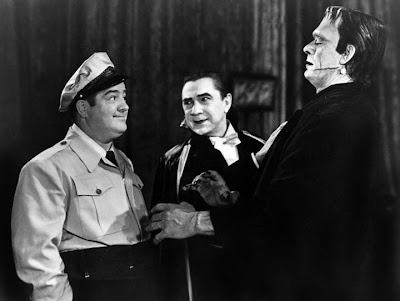 Charles Barton | 1948 | ★★★
Abbott and Costello meet neither Frankenstein (nor any ghosts – as the original UK release title would have it) in this well-crafted and oft hilarious though sometimes somewhat repetitive star vehicle, which is generally considered to be the comic duo’s greatest feature, but they do meet Frankenstein’s Monster (Glenn Strange), The Wolf Man (Lon Chaney), and Dracula (Bela Lugosi), not to mention a couple of exotic beauties with an apparently abnormal taste in men – both claim to fancy Lou Costello’s Wilbur Grey! They don’t, of course, as both have an alternative agenda: the first, Sandra (Lenore Aubert), is in league with Dracula, and is busily trying to procure the poor schlub’s brain for the Monster’s restoration; and the second, Joan (Jane Randolph), an insurance investigator, believes the bickering duo to have stolen a local house of horrors’ highly-insured, brand-spanking new prize attractions – the mysteriously missing bodies of Dracula and Frankenstein’s Monster. But with Bud Abbott's Chick Young slow to believe both his rotund pal’s newfound luck with the ladies and his claims to have seen the aforementioned monsters, Wilbur finds the mere act of staying alive to be an increasingly difficult one. Luckily, Lon Chaney’s Larry Talbot comes to the rescue – well, sort of anyway, as the American-accented hirsute Londoner has the annoyingly uncanny knack of turning up just moments before he is about to transform in to The Wolf Man. Entertaining.
-- Iain Stott