Amatørene / You Really Got Me 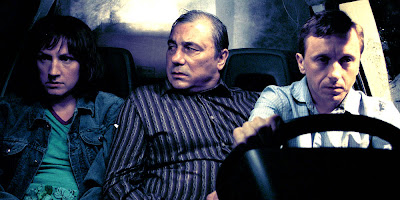 Pål Sletaune | 2001 | ★★★
In Sletaune’s short and not-so-sweet black comedy, a disgruntled drummer (Trond Høvik) arranges for his band’s obnoxious frontman (Philip Zandén) to be kidnapped by a pair of – it turns out – incompetent criminals (Per Schaaning & Bernhard Ramstad), in order to pocket the ransom money. However, so incompetent are they that they soon lose the loathsome Swedish headbanger to a rival kidnapper – a bankrupt, put-upon fast-food peddler (Robert Skjærstad), who chances upon the victim whilst out in the woods attempting to commit suicide. But will this born loser prove any less incompetent? Generally well crafted, with some good performances, particularly from the excellent Skjærstad, the film proves to be thoroughly entertaining, if perhaps vaguely insubstantial.
-- Iain Stott