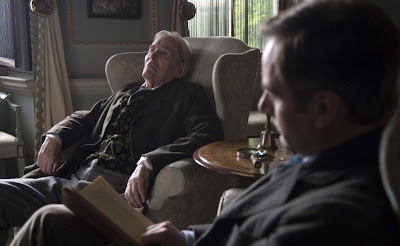 A man grieving for his war-dead brother and recently-departed mother finds his interest in reincarnation piqued by his Tokaji-fuelled Thursday night conversations with the titular religious figure, who finds himself transported back to a previous life as a dog whenever he imbibes said Hungarian wine, in Fraser’s gently affecting Edwardian-set drama. The film is generally well-crafted, though McGlashan’s vaguely overblown score occasionally threatens to overwhelm the otherwise understated, talky action. However, the performances are all good, with O'Toole’s terribly affecting turn proving the stand-out.
-- Iain Stott