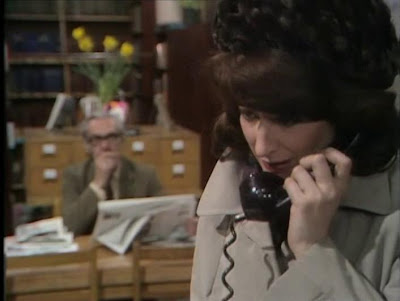 When a string of young women begin to turn up strangled, a librarian comes to believe that she knows the identity of the killer, but the police are slow to believe a frustrated old maid such as her (29-years-old!), whilst we, the viewers, quickly earmark two or three other suspects as well, in this thoroughly and entertainingly unpredictable mystery-thriller. Well-crafted, with good performances, particularly from Le Mesurier, this Thriller (1973-1976) episode is perhaps as interesting for its glimpse at contemporary societal attitudes as it is for its well thought out mystery plot.
-- Iain Stott