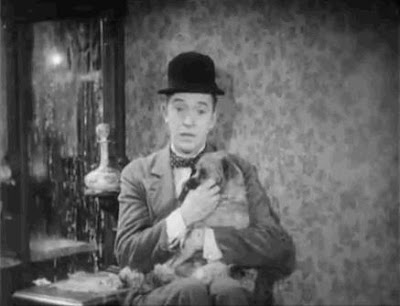 Stan’s bout of hiccoughs alerts their mean-spirited landlord to the existence of his and Ollie’s verboten pet dog, Laughing Gravy, who he kicks out, without a second thought, into the cold and snowy night. Inevitably, their attempts to retrieve him end only in pain, suffering, and their own impending homelessness, in this oft hilarious Laurel and Hardy short, which is available in both a two- and three-reel version, with each having a markedly different ending. The shorter version, with its uncharacteristically dark finale, is the punchier and more memorable one; whilst the longer version is even more uncharacteristically sentimental – but still good fun, never the less.
-- Iain Stott