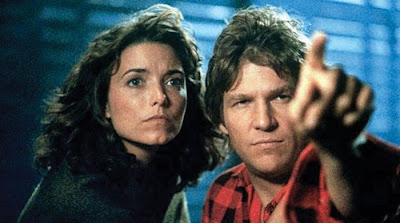 In Carpenter’s diverting, if somewhat familiar-feeling, romantic sci-fi road movie, an extra-terrestrial, shot down by US missiles, takes the physical form of a woman’s dead husband, and forces her to drive him across the country to reconvene with his mother ship. However, despite being born of tumult, their relationship slowly develops into something much more touching. Never the less, coming across like E.T. (1982) for adults, the film’s ideas never really feel fresh enough to fully satisfy.
-- Iain Stott