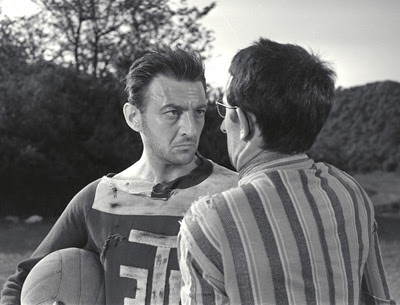 To celebrate Hitler’s birthday, the commander of a Hungarian labour camp decides to arrange a football match between his inmates and a team of visiting German soldiers, and enlists the talents of a celebrated former footballer to help make it happen, whose only request being that he and his teammates be properly fed and excused from work. However, the minds of the eleven men – comprising of Communists, criminals, and Jews – soon turn to thoughts of escape, in Fábri’s unevenly diverting wartime comedy-drama. Strange tonal changes, unlikely plot developments, and a general overlength detract somewhat from the entertainment, but charismatic performances and several laugh-out-loud moments make this film, which was remade by John Huston as Escape to Victory (1981), more than worth a watch.
-- Iain Stott