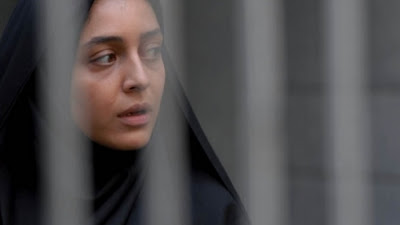 After his wife leaves him, a middle class Tehranian man hires a woman to act as both his housekeeper and carer to his dementia-suffering father. However, with her numerous debt- and pregnancy-related personal problems, not to mention her ethical concerns about the job, things soon become too much for her, resulting in an incident that will lead to both employer and employee making serious legal claims against one another. His wife and daughter, her tutor, and the woman’s unemployed husband will also come to play their part, in this intense, thoroughly compelling drama. The performances are generally outstanding, giving life to Farhadi’s masterful screenplay, which is populated not by heroes and villains, but by beautifully realised human beings, raising what at first might appear to be a simple domestic drama to the level of great tragedy.
-- Iain Stott