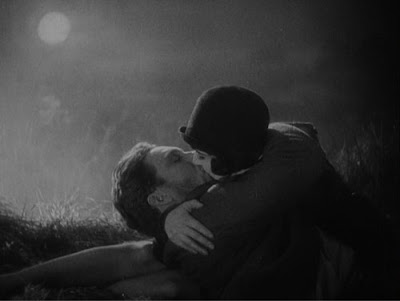 At the prodding of his sexily exciting mistress, a struggling farmer decides to murder his loving, homely wife. However, when it comes time to commit the grisly deed he finds himself unable to do so. But with her now aware of his homicidal intentions, and gripped with fear and heartbreak, she flees into the city in a flood of tears. Miraculously, though, they are soon reunited, when he somehow regains his love for her and she somehow manages to forgive and forget. Never the less, after a day out in the Smoke filled with mirth and merriment, Mother Nature decides to play a cruel trick on them, in Murnau’s psychologically unconvincing but ethereally beautiful romantic thriller. Adventurous mise en scène, gorgeous photography, gently poetic editing, and a pair of tremendously affecting performances from O'Brien and Gaynor combine to oft sublime effect.
-- Iain Stott