The Strange World of Gurney Slade (1960) 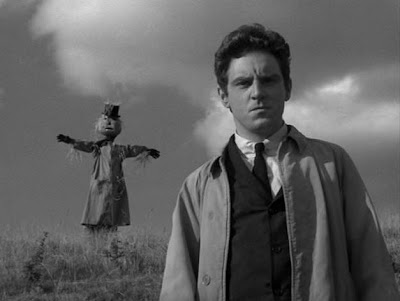 Gurney Slade (Newley, outstanding), a character in a bog-standard new sitcom, ignores the cue for his first line and walks off set, all ready to put the world to rights. For three episodes, he wanders around getting into various low-key (though generally fantastical) adventures with people, animals, and inanimate objects alike. However, in the fourth episode he is put on trial for having no sense of humour, after seven million-odd people report that they failed to find a recent television show of his funny. Along similar lines, the fifth episode sees a group of school children, a couple of revellers, and a tinker get literally lost in his mind, after they misconstrue his thoughts on just that concept. The final episode sees him attempt to find work for all the characters that he created in the previous five episodes, whilst he anxiously awaits his own foreboding fate. Though seldom laugh-out-loud funny, this ground-breaking comedy is filled with the sort of intelligent, idiosyncratic humour that lives with you long after the ephemeral joy of belly laughter has disappeared into the ether. Mixing satire, fantasy, irony, and absurdism with a healthy dose of existential angst, it is a truly ingenious show. It is also an uncommonly beautifully photographed one, comprising of exquisitely composed frames shot on 35mm black & white film. One of a kind.
-- Iain Stott