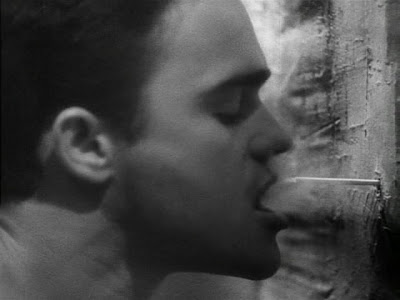 A voyeuristic prison guard looks on as a number of inmates, alone in their cells, attempt to fulfil their need for sexual intimacy. Sharing fantasies, cigarettes, and masturbatory sessions, two of the prisoners, separated by a common wall, form an unlikely bond before his eyes. However, the guard, frustrated in the extreme, soon wants in on the action, but is unable – even with his pistol in hand – to penetrate their romantic dreams of freedom. Symbolically rich and lyrically sensual, Genet’s poetic short film, his sole directing credit, is a very beautiful work, and one that easily transcends its vaguely pornographic core.
-- Iain Stott