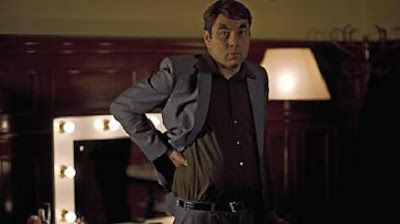 Bookended by a gig at the Oxford Union in 1990, this affecting BBC drama delicately paints a portrait of the oft tumultuous relationship between risqué comedian Frankie Howerd and his manager-cum-lover Dennis Heymer, concentrating on the period between when they met in 1954 (as the entertainer’s star was on the wane) and his eventual resurgence in the early 1960s. Strikingly shot with evocative photography and bold mise en scène, Frankie Howerd: Rather You Than Me also serves to beautifully detail the emotionally vulnerable star’s battles with anxiety, depression, stage fright, and self-homophobia, doing so with great style and élan. The excellent performances of Spall and in particular Walliams are also decidedly eye-catching, in what proves to be a terribly moving piece of television.
-- Iain Stott