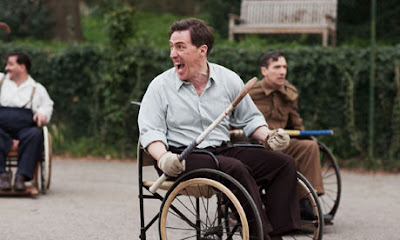 Upon arrival at the spinal injuries unit of Stoke Mandeville Hospital during the Second World War, German refugee Dr Ludwig Guttmann was horrified by the human waste that he found taking up its beds. Instead of receiving real treatment, its patients had been merely sedated and made comfortable as they awaited their demise. And so, ruffling more than a few feathers as he went along, he began to campaign for better equipment, more personnel, added entertainment, and – crucially – access to both gym equipment and PT instruction. With sport playing a large part in the transformation of his patients from bed-ridden, suicidal embarrassments to lively, ambitious young men, he subsequently decided to establish a sporting competition for paralysed competitors, the first of which ran in parallel to the 1948 London Olympic Games and proved to be a forerunner to the modern Paralympics. Though perhaps neither as historically rigorous as it should have been nor as emotionally affecting as it could have been, this light-hearted unsentimental feel-good biographical comedy-drama still managed to put a huge smile on my face. Solidly crafted with charismatic performances and witty writing, it entertains and inspires throughout, without ever having to resort to any gushing oh-captain-my-captain moments. However, the final act is perhaps just a little on the rushed side. Hugely entertaining, though.
-- Iain Stott