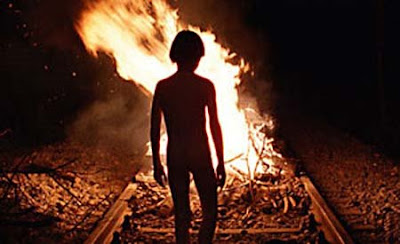 Following some sort of apocalyptic event, a young family flees the city for its weekend country home, only to be greeted by another, gun-wielding family, which relieves it of its food, water, and vehicle, and sends it on its way – but not before tragedy strikes. A man down and without supplies or shelter, the surviving family members take to the road, eventually seeking refuge near a railway with other miracle-hungry refugees. As more and more people arrive, so too do supplies dwindle and tensions and new mythologies grow, in Haneke’s austere post-apocalyptic drama. Almost unbearably bleak, the film’s few moments of beauty are rendered all the more so for their unexpected arrival. Fine performances (particularly from the outstanding Demoustier), impressively cold photography, and some thought-provoking plotting combine to generally excellent effect.
-- Iain Stott