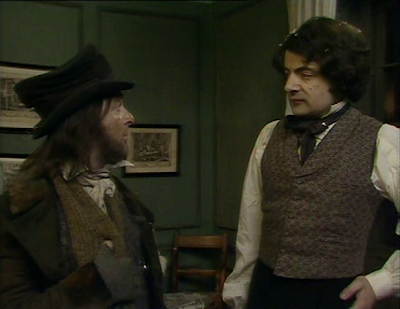 Ebenezer Blackadder – the kindest man in all of England, a man whose generous, charitable nature is forever abused by friends, family, and strangers alike – finds himself, on Yuletide Eve, visited by The Spirit of Christmas. However, rather than admonishing him for his misdeeds – as would usually be the case – the ghostly figure instead congratulates him on his good works, which prove all the more admirable in the wake of his rotten ancestry – to which he is given a brief visual history. Surprisingly though, rather than being disgusted by his forebears' behaviour, he comes, instead, to realise the error of his benevolent ways, and sets about a living new life of sardonic barbs, self-gratification, and general cynicism. Filled with brilliant one-liners and inspired comic performances from its wonderfully assembled cast, Richard Curtis and Ben Elton’s hilarious reworking of Charles Dickens's A Christmas Carol (1843) proves delightful throughout.
-- Iain Stott