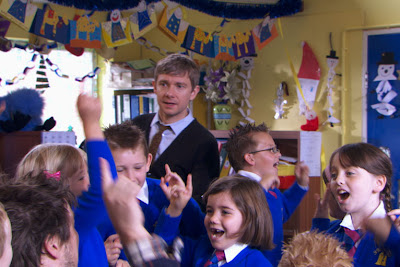 Paul Maddens, a failed actor-turned-primary school teacher, charged with the unenviable task of supervising his school’s nativity play, finds himself swamped by an ever-growing lie, after he tells a former drama school rival – now a teacher at a swanky fee-paying school – a small porky pie, which is overheard by his great gangling man-child of a classroom assistant and spread throughout the school as fact. And the lie? That Hollywood, led by his seemingly successful ex-girlfriend, is coming to film their production. Unsurprisingly, everyone – bar Mr Maddens, who quickly turns his attentions to the seemingly impossible task of making the fiction a reality – is soon very excited at the prospect, in Isitt’s mildly diverting seasonal comedy. A strong central performance and some charismatic turns from the children hold the attention throughout, but the film’s uneven tone, spotty supporting cast, and decidedly silly plotting detract greatly. The actual nativity play itself, though, proves great fun.
-- Iain Stott