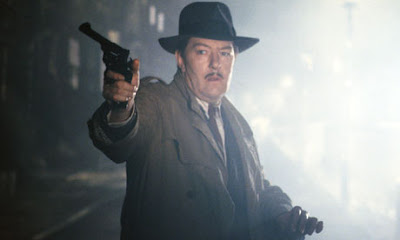 Potter’s magnum opus – a dense and complex, yet seductive and accessible, examination of the creative process – sees a writer of seedy detective novels, hospitalised with severe psoriatic arthritis (a condition that affects the skin and joints to debilitating effect, and of which Potter himself had suffered for over 20 years), spend his bed-ridden hours mentally revising his best known novel ♪The Singing Detective♫, and in so doing escaping the nightmarish pain of his ailment to a 1940s post-war world of crooning gumshoes, sexy Soviet spies, and illusive Nazi fugitives.

However, dreams of significant moments from his childhood, meetings with a psychiatrist, a number of drug-induced musical hallucinations, and sporadic visits from his estranged wife serve only – at first, at least – to further distract him. Soon, though, the many facets of his physical and mental state begin to bleed in and out of each other, blurring the lines between fact and fiction to paranoia-inducing effect.

Michael Gambon excels in the central role, with excellent support coming from Alison Steadman as his mother, Lyndon Davies as his ten-year-old self, Janet Henfrey as his primary school teacher, Bill Paterson as his shrink, and Patrick Malahide as his multi-faceted nemesis. Jon Amiel directs with style, with Ken Westbury’s photography and Bill Wright & Sue Wyatt’s editing also catching the eye. And of course, the soundtrack of ‘40s crooning classics – to which much of the cast lip-synchs throughout – also proves delightful.
-- Iain Stott