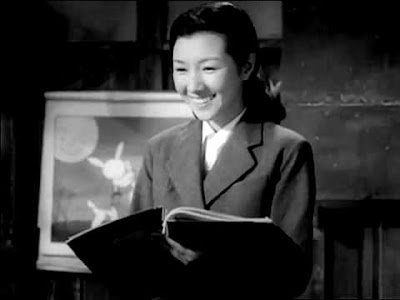 From the late 1920s till the conclusion of The Second World War, Kinoshita’s unrelentingly bleak and heartbreaking yet strangely agreeable and affecting epic follows the ups and downs of a young humanist, quietly railing against the chauvinistic world around her. Played with customary grace and élan by the sublime Takamine Hideko, Miss Ōishi is slowly transformed (as time, tragedy, and experience take their toll) from wide-eyed primary school teacher, filled with life and optimism, to grieving widow, largely withdrawn from the world. However, she never loses her basic humanism or her love for her pupils – whose prospects (or lack thereof) prove such a heartbreak to her. With gender inequality and militarism rampant, her delicate and decidedly unfashionable ways prove insurmountably alienating. However, following the conclusion of the war, wearied but not beaten by experience, she retakes her rightful place in the world. Despite uneven juvenile performances, an occasionally baffling score, and the odd mawkish moment here and there, Kinoshita’s acclaimed film proves – thanks to its delicate direction, masterful pacing, and excellent central performance – really quite beautiful.
-- Iain Stott