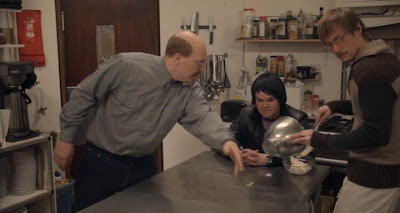 After the loss of their jobs on The Night Shift, Daníel (Ragnarsson), Georg (Gnarr), and Ólafur (Sigfússon) find themselves working at a remote country hotel in northern Iceland, owned by the sexually aggressive Gugga (Jónsdóttir), with the managerial hierarchy having been switched, with Daníel now being the headman and Georg finding himself on the lowest rung of the ladder. However, when Georg’s sociopathy makes itself bloodily apparent, the old order is soon restored, in Bragason’s hugely entertaining follow-up to The Night Shift (2007), which proves to be much darker (figuratively rather than literally) and generally more aggressively funny. The performances are all still excellent, with the additional cast members proving more than adequate foils to the central trio. Visually, The Day Shift is also more interesting than its predecessor, which struggled to find anything striking in its single location, jet-black skies, and neon lighting. However, the plotting is never quite as intricate or subtle as before, making this a much bigger, louder, and generally less refined, though still hugely entertaining television serial in comparison.