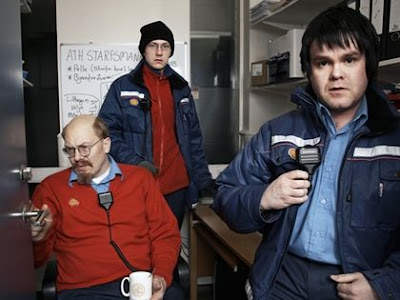 The Night Shift is that rarest of things – a foreign-language television series that, despite not featuring a single murder, was given an outing on the BBC. Of course, with such a low body count, it came and went without the (barely fathomable) fanfare that greeted the likes of the admittedly oft entertaining but decidedly risible Wallander (2005-2010) and the oft brilliant but deeply flawed The Killing (2007). Gentleness, it would seem, is not a quality that the British television-viewing public take to so easily. Luckily, with the prospects of the BBC showing any of The Night Shift’s follow-ups looking decidedly bleak, the purchasing of the English-subtitled Icelandic DVDs has allowed me to both revisit this first instalment and catch up with its three sequels.

Bragason’s delicious confection begins when Daníel (Ragnarsson), a depressed, anxiety-ridden 23-year-old university drop-out, takes a job at a Reykjavik petrol station on the night shift, hoping to escape the pressures and expectations of his family and friends. Hopes of a quiet life, however, are dashed by both his tyrannical shift manager, Georg (the outstanding Gnarr), a rules’n’regulations-loving Swedophile and Ólafur (the hilarious Sigfússon), his put-upon, hopelessly naïve dreamer of a co-worker. The early parts of Bragason’s gently funny, quietly satirical, and generally beautifully observed comedy serial, which concentrate on sketching out the character details of its three social misfit protagonists, are notable for their lack of any discernible plot. However, the seeds of future comedy gold are sewn in these early episodes, as we are introduced to several plotlines that effortlessly gather pace over its twelve parts – including Ólafur’s mismanagement of a local band, his involvement with a Nigerian internet scam, his gentle flirtations with a mysterious middle-aged woman, and (amongst numerous others) the constant debate over the shift employees’ holiday fund. A decided and most welcome delight.