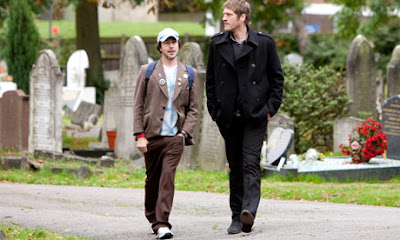 After an idyllic breakfast with his idyllic family in the idyllic kitchen of their idyllic home in its idyllic suburban surroundings, Tom (Fisher, affectingly subtle), a 6’4”, 40-ish-year-old gentle giant leaves for work as usual, but instead of participating in the 9-5 grind bafflingly boards a train set for London, discards his mobile phone and credit cards (but not a photograph of his wife and baby son), and sets about becoming one of the city’s many down-and-outs. Before long, he meets the forever-used-and-abused-yet-eternally-upbeat-and-happy Aidan (Gillen, boisterously brilliant), whom he is slow to warm to, but whom he is equally unable to shake off. His diminutive new pal/irritant subsequently introduces him to his decidedly gorgeous flatmate, Linda (Steele, convincing), who it turns out is the hopelessly naïve and slow-on-the-uptake Irishman’s prime user-and-abuser. As they spend time together, gradually forming a close bond of some sort, they slowly come to realise and understand their various positions and predicaments. However, theirs is not a friendship that was meant to last.

Thraves’s humanity-drenched third feature – coming after his outstanding debut The Low Down, from 2000, and his 2009 Patricia Highsmith adaptation, The Cry of the Owl (which I have yet to see) – was shot on a budget of just £30k, which he raised by the re-mortgaging of his own home, an act that I hope, being an admirer, will be proved brave rather than foolhardy by its cinema, DVD, and download business. Luckily, the film itself is a little cracker – funny, moving, intriguing, and filled with excellent performances, captured beautifully by Derry and Kinnings’s unfussily striking photography, gorgeously accompanied by Stems’ discreet yet affecting score. Still, as well-crafted and touching as it is, it never quite reaches the creative heights of The Low Down, though repeat viewings, of which I’m sure there’ll be numerous, might well prove me wrong.
-- Iain Stott