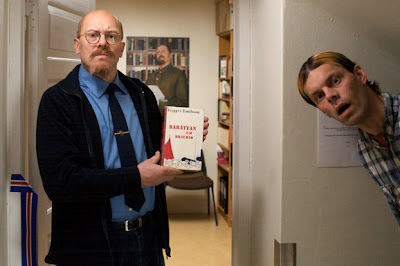 Thanks to Georg’s violent vagiphobia, both he and Daníel find themselves in prison at the beginning of this third -vaktin outing, which is probably the funniest of three, as well as being by far the most affecting. And before long, thanks (again) to the concerted efforts of Georg, Ólafur soon joins them. Georg takes to prison life like a duck to water, as he quickly manages to worm his way into the position of a sort of auxiliary guard, uniform and all, much to the chagrin of all concerned – both staff and inmates. But who would ever argue with the booming Stalinist? Ólafur also has never had it so good: a roof over his head; no rent or board; a regular wage in his pocket; and a great hulking Viking of a beast friend (Ólafsson) to look after him and keep away the usual vultures. Daníel, however, is not so lucky, having to deal with both a volatile, drug-pushing Man United-fanatic (Hjaltason) and a duplicitous, wolf-in-sheep’s-clothing forger (Sigurdsson), not to mention the continued expectations of his ever growing family. The performances, as before, are all excellent, with Thors, as Georg’s put-upon Ólafur-substitute, proving to be the pick of the new cast members, though Ólafsson, as a soulful (but definitely not gentle) giant, also excels. Visually, however, the prison setting proves a sight less striking than the Icelandic countryside of the previous outing. Hugely entertaining, never the less.