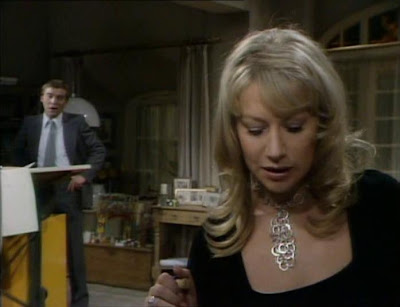 A keep-fit fanatic, who marries and murders rich older women for their money, finds himself torn between a glamorous young theatre designer, who he’d like to pursue just for the pleasure of it, and a garrulous northern widow, whose bulging bank balance has him salivating into his orange juice. However, after deciding to pursue both women, and embracing all of the double-dealing and running-around that such an ambition entails, a persistent solicitor, who unsubstantiatedly believes him to be the serial killer that he is, comes snooping around, further complicating matters. But, coolness personified, he takes it all in his stride, in this cracking little thriller, which has a particularly satisfying sting in its tale. And, although I guessed the twist myself quite early on, its final act reveal is nevertheless still quite brilliant, thanks in the main to the fine performances of the distinctively-voiced Jayston and the decidedly sexy Mirren.
-- Iain Stott