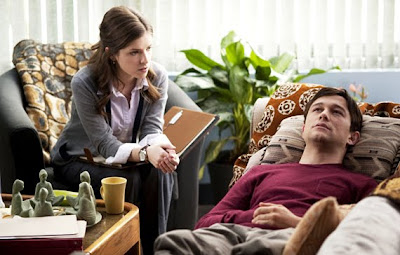 A 27-year-old radio journalist, Adam (Gordon-Levitt), battles against cancer, aided by his uncouth best friend, Kyle (Rogen), who thinks that his diagnosis is just another tool with which to pick-up women, his vaguely committed artist girlfriend, Rachael (Howard, who is clearly getting younger-looking with each passing year), his 24-year-old therapist, Katherine (Kendrick), who is so young that she has never even heard of Doogie Howser, his over-protective mother (Huston), and his chemotherapy-buddies Mitch and Alan (Frewer and Baker Hall), who introduce him to the pleasures of medical marijuana.

Levine’s unfussy direction is generally fine, though a superfluous crane shot early in the film filled me with (thankfully unwarranted) foreboding. However, Reiser’s script proves far too predictable and constantly threatens to devolve into just another rom-com. Luckily, Gordon-Levitt and Kendrick’s performances are charming and affecting enough to just about carry it through. Giacchino’s alluringly melancholy score also adds considerably to the film's gentle charm, though some of the other soundtrack choices – such as Radiohead’s High and Dry – feel a little manipulative. Diverting enough, though.
-- Iain Stott