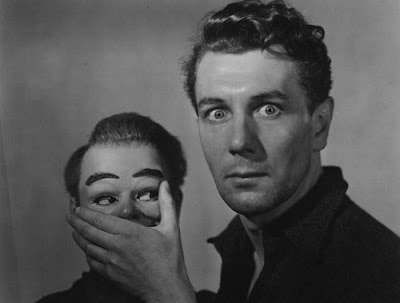 Alberto Cavalcanti, Charles Crichton, Basil Dearden, & Robert Hamer | 1945 | ★★★★★
An architect (Mervyn Johns, excellent), spending the weekend with a potential employer (Roland Culver) at his country home, comes to realise that a recurring nightmare of his is beginning to come true, and sets out to convince his host’s other guests of their part in it, in this consummately acted, majestically crafted, and decidedly ingeniously structured supernatural omnibus film. One of said guests, an exotically-accented psychiatrist (Frederick Valk), who is naturally sceptical about such things (though curious, never the less), soon finds himself being regaled with a series of ghostly goings-on – goings-on that have allegedly been personally experienced by his fellow visitors, who, naturally then, seem more inclined to believe the stranger’s incredible tale.


A former racing driver (Anthony Baird) tells of how a ghostly vision saved him from a deadly bus crash; Sally Ann Howes’s bubbly teenaged girl recalls of how she comforted a murdered little boy during a game of sardines at a Christmas party; Googie Withers remembers how a haunted mirror (almost murderously) possessed her husband; and the host himself mischievously tells of how a pair of golfing buddies (the brilliant Basil Radford & Naunton Wayne) became love rivals – a rivalry that continued beyond the grave. After all of which, the psychiatrist even chips in with a story of his own – which turns out, told as it is from the mouth of a sceptic, to be the most chilling of all – centring on the strange case of a ventriloquist (Michael Redgrave, outstanding) who apparently becomes violently possessed by his beloved dummy, Hugo. Most chilling that is, until… Easily, unless I’ve somehow missed a better one, the greatest film of its kind.
-- Iain Stott