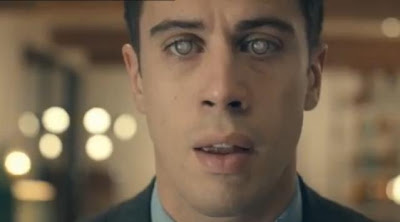 The final episode of Black Mirror sees writing duties handed over from Charlie Brooker to Jesse Armstrong, co-creator of Peep Show, Fresh Meat, and The Old Guys. However, despite his comedy credentials, this is a particularly bleak affair, almost completely devoid of humour, though filled with enough pathos and insight to make it compelling, affecting, and decidedly disturbing viewing.

Set in a not so distant future, in which most people have been fitted with a chip that records and stores all that they see and hear, ready for playback and editing, both on the eyes themselves and on large television screens, this short television film depicts the final days of a spectacularly imploding marriage. The technology itself is ever present, but the central plot, driven by a husband’s all-consuming jealousy of, and suspicion about, his wife’s relationship with an old flame, whom they encounter at a dinner party, could easily, with just a couple of tweaks, be re-written as a straight drama – and one, for that matter, that would almost certainly be just as moving. However, said technology does give the piece added depth and nuance, forcing us to question the ever more dominant and intrusive part that similar technology plays in our everyday lives, with one particular social networking site – forever looking to document our every move – springing immediately to mind.

With its thought-provoking script, discreet direction, striking photography, affecting performances, and distinctive though unobtrusive score, The Entire History of You is perhaps the best of the three Black Mirror films, and certainly, whatever the case, an excellent piece of decidedly plausible science-fiction.
-- Iain Stott