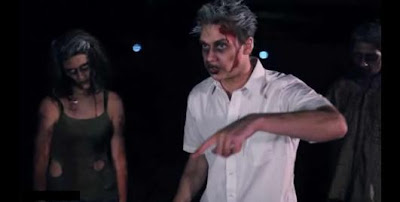 In Birch’s diverting horror-comedy, a pack of zombies, a masked killer, a vampire, and Big Foot argue over whose night it is to murder young lovers in the park, not realising that one of their potential prey is none other than Vanna Helsing, who proceeds to make them bloodily regret it. The short is at its best when the amusing Brandt’s zombie leader is given screen time to bemoan his colleagues’ inability to use the Google Calendar that he set up, but loses its way a little when the action kicks in.
-- Iain Stott