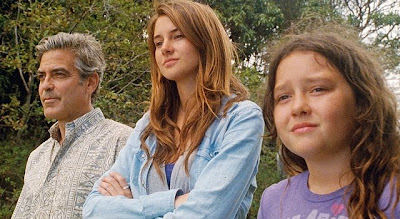 When it becomes evident that his wife is not going to awaken from her coma, a Hawaiian lawyer, in the middle of a potentially lucrative land deal, with his two daughters in tow, attempts to deal with her imminent death, whilst also endeavouring to find the man with whom she had been having an affair, in Payne’s engrossing, but never entirely convincing, family drama. Woodley does well as the eldest daughter, but Clooney’s turn lacks the gentle melancholy with which he had previously infused so many of his better performances, and which would surely have benefitted this film immensely.
-- Iain Stott