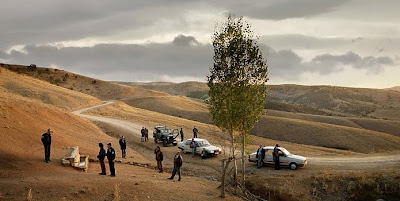 Several police officers, accompanied by a public prosecutor, a doctor, and a couple of diggers, set off, under the direction of a pair of confessed killers, into the night-shrouded Anatolian steppes in search of a recently buried body, in Ceylan’s haunting, humanity-drenched police procedural drama. The performances from the entire cast are of a remarkably high standard – with the turns of Uzuner and Birsel proving particularly nuanced and affecting – and, for once, actually manage to just about outshine the Turkish director’s typical formal elegance. As a result, then, this is perhaps his most moving film to date.
-- Iain Stott