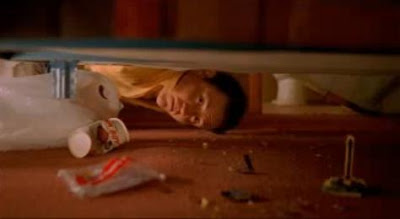 In Anderson’s hugely entertaining sci-fi comedy-mystery, a struggling actor, $27K and change in debt, agrees to courier a mysterious blue suitcase out to the desert to a man named Cowboy for $27K and change, but this seemingly simple, though decidedly dodgy, deal becomes complicated by a hard-drinking nymphet, her jealousy-crazed boyfriend, a truck stop full of UFO nuts, a rather scary client, an unnerving FBI agent, and a murdered, headless neighbour. Filled with wonderful comic detail and a raft of enjoyable cameos, The Big Empty is a film that tends to improve with subsequent viewings.
-- Iain Stott