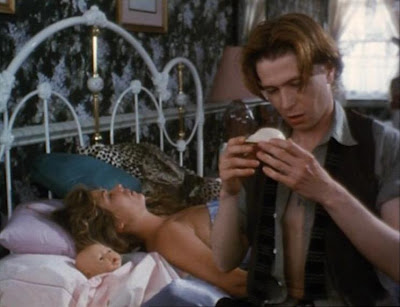 A childlike Englishman arrives on the doorstep of an unhappily married American housewife, claiming to be the son that she was forced to give up for adoption as a 15-year-old, but his generally inappropriate behaviour and his uncanny similarity to his rapist father would suggest that all is not quite as it seems, in Roeg’s nightmarish yet frequently hilarious realisation of Potter’s reworking of his 1974 BBC play Schmoedipus. Roeg’s visual flair, Russell and Oldman’s deliciously OTT performances, and Lloyd and Bernhard’s hilarious turns combine to scabrously entertaining effect.
-- Iain Stott