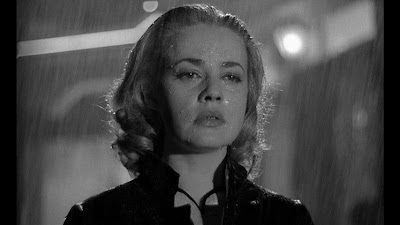 In Malle’s excellent thriller, a man murders his boss – the husband of his lover – cleverly making it look like a suicide. However, he leaves one piece of incriminating evidence at the scene, and must go back to retrieve it, but becomes stuck in a lift when the building’s power is turned off for the evening, leaving him stranded till morning. Meanwhile, his girlfriend (and accomplice) wanders the streets wondering what has become of him, not knowing if he has committed the bloody act or not, whilst a pair of young hoodlums takes his car, gun, and identity for an eventful joyride. The film’s standard thriller plot, which wouldn’t look out of place on a television anthology series, is enlivened by strong direction, magical scoring, and a wonderfully subtle performance from Moreau.
-- Iain Stott