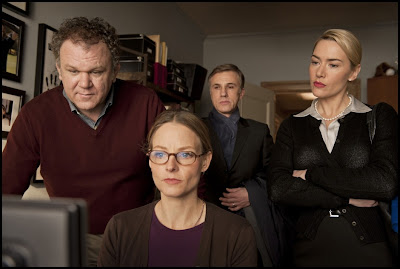 The parents of a boy who struck a classmate with a stick, knocking out two of his teeth, visit the home of the parents of the victim to calmly discuss the matter. However, alcohol, vomit, mobile phones, and shifting allegiances soon ensure that this initial civility proves short lived, in Polanski’s generally entertaining, if vaguely disappointing, satirical comedy. The performances are fine, if unspectacular. But the film-making is generally quite bland, with the tone falling awkwardly between camp and credible. However, there are just about enough laughs to hold one’s attention.
-- Iain Stott