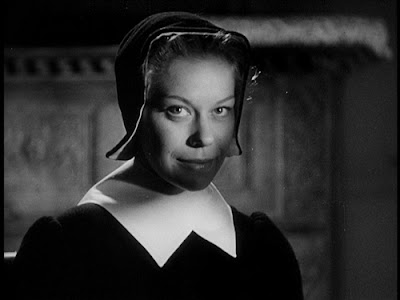 Carl Th. Dreyer | 1943 | ★★★★★
Against the backdrop of a vicious witch trial, a young woman (Lisbeth Movin) falls in love with the son (Preben Lerdorff Rye) of her middle-aged clerical husband (Thorkild Roose), who is troubled by both his suspicions of this and the guilt he feels over his ignoring of the denouncement of said young wife’s mother as a witch, in Dreyer’s majestic 17th century-set masterpiece. A raft of excellent performances – in particular Movin’s quietly, but decidedly, sexy turn – are brought beautifully to life by Dreyer and photographer Karl Andersson’s symbolically rich visual storytelling.
-- Iain Stott