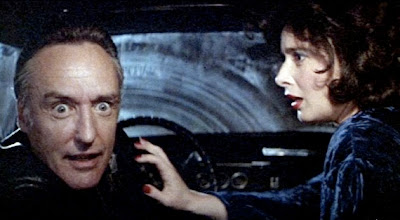 A young man, home from college following the hospitalisation of his father, finds a severed ear near to his house, and, after reporting it to the police, does a little amateur detective work of his own, assisted by the daughter of the police detective with whom he dealt. However, he soon finds himself in over his head when he becomes involved with a troubled femme fatale and a decidedly deranged gangster, in Lynch’s hugely entertaining black comedy-cum-mystery-thriller. Potent imagery, memorable dialogue, and some brilliantly full-blooded performances (particularly from Rossellini and Hopper) combine to quite exquisite effect.
-- Iain Stott